If you’re an Android developer, you’re probably familiar with Google’s Espresso test automation framework. As an open-source tool, it’s very easy for developers to use and extend within their working environment (Android Studio IDE).


But before discussing the benefits of Espresso, let’s understand the motivations and pains developers and test automation engineers face today while trying to validate their Android application (APK) throughout the build/dev/test workflow.


In light of these challenges, it’s clear why the adoption of the Espresso automation framework is high. Even though Espresso is an instrumentation-based test framework, it has many benefits to both developers and test automation engineers. It uses Junit underneath the hood, so Espresso is easy to use within leading IDEs and provides useful testing annotations and assertions. It’s also fully integrated within the leading Google Android IDE – Android Studio.

1. Espresso workflow is simple to use

The way Espresso works is by allowing developers to build a test suite as a stand-alone APK that can be installed on the target devices alongside the application under test and be executed very quickly.

2. Fast and reliable feedback to developers

As developers are trying to accelerate deployment, Espresso gives them fast feedback on their code changes so they can move on to the next feature or defect fix; having a robust and fast test framework plays a key role.

Espresso does not require any server (like Selenium Remote WebDriver) to communicate with; instead it runs side-by-side with the app and delivers very fast (minutes) test results to the developer.

Because Espresso offers a synchronized method of execution, the stability of the test cycle is very high. There’s a built-in mechanism in Espresso that, prior to moving to the next steps in the test, validates that the Element or Object is actually displayed on the screen. This eliminates test execution from breaking when confronted with “objects not detected” and other errors.

Developing Espresso test automation is quite easy. It is based on Java and Junit, which is a core skillset for any Android app developer. Because Espresso works seamlessly within the Android Studio IDE, there’s no setup or ramping up and no “excuses” – to actually shift quality in the in-cycle stage of the app SDLC. In addition to the above, there is of course the large community powered by Google that pushes the Espresso test automation framework and allow easy and fast ramp up for newcomers. Learn more using the Espresso Cheat sheet below: 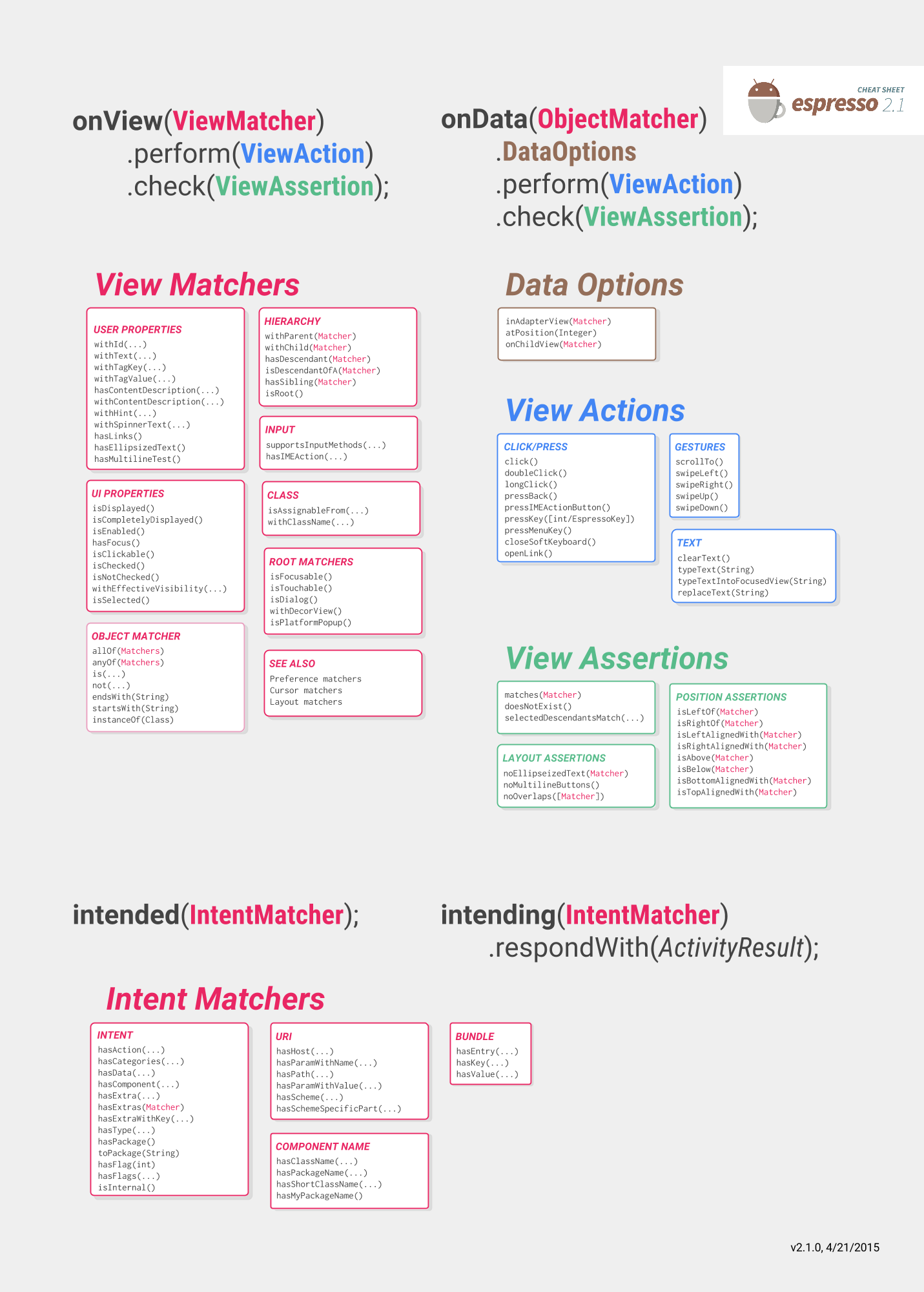