Human beings are prone to mistakes and this very nature of humans make software vulnerable to bugs, defects and errors. So before shipping your software, testing

This article is about testing the UI of the Android applications.

“Testing leads to failure, and failure leads to Understanding”

Testing every method/function (or unit) of your code for e.g: given a function, calling it with param x should return y. These tests are run on JVM locally without the need of an emulator or Device.

Espresso is an instrumentation Testing framework made available by Google for the ease of UI Testing.

2.Add to the same build.gradle file the following line in

This sets up the Android Instrumentation Runner in our app.

AndroidJUnitRunner is the instrumentation runner. This is essentially the entry point into running your entire suite of tests. It controls the test environment, the test apk, and launches all of the tests defined in your test package

And annotate it with @RunWith(AndroidJUnit4::class)

The instrumentation runner will process each test class and inspect its annotations. It will determine which class runner is set with @RunWith, initialize it, and use it to run the tests in that class. In Android’s case, the AndroidJUnitRunner explicitly checks if the AndroidJUnit4 class runner is set to allow passing configuration parameters to it.

There are 6 types of annotations that can be applied to the methods used inside the test class,which are @Test, @Before, @BeforeClass, @After, @AfterClass, @Rule

Important things to note is that

Note:You can have more than one method annotated with any of the annotations like @Before,@Beforeclass etc. But the order in which JUnit finds methods is not guaranteed.Like if there is two methods annotated with @Before, There is no guarantee which one will be executed.

The espresso test of a view contains

Espresso uses onView (Matcher<View> viewMatcher)method to find a particular view among the View hierarchy. onView() method takes a Matcher as argument. Espresso provides a number of these ViewMatchers which can be found in this Espresso Cheat sheet.

Every UI element contains properties or attributes which can be used to find the element.Suppose for finding an element with

2.Performing actions on the View

After finding the View you can perform actions on the View or on its Descendant using ViewActions of the Espresso.Some of the Most common actions are click(),clearText() etc.

Note: In cases where the View isn’t directly visible such as in a case where the view is in a scroll view and isn’t you will have to perform the scrollTo() function first and then perform the action.

After performing an action on the View we will want to see if the view behaves as we want, This can be done using check(ViewAssertion viewAssert) 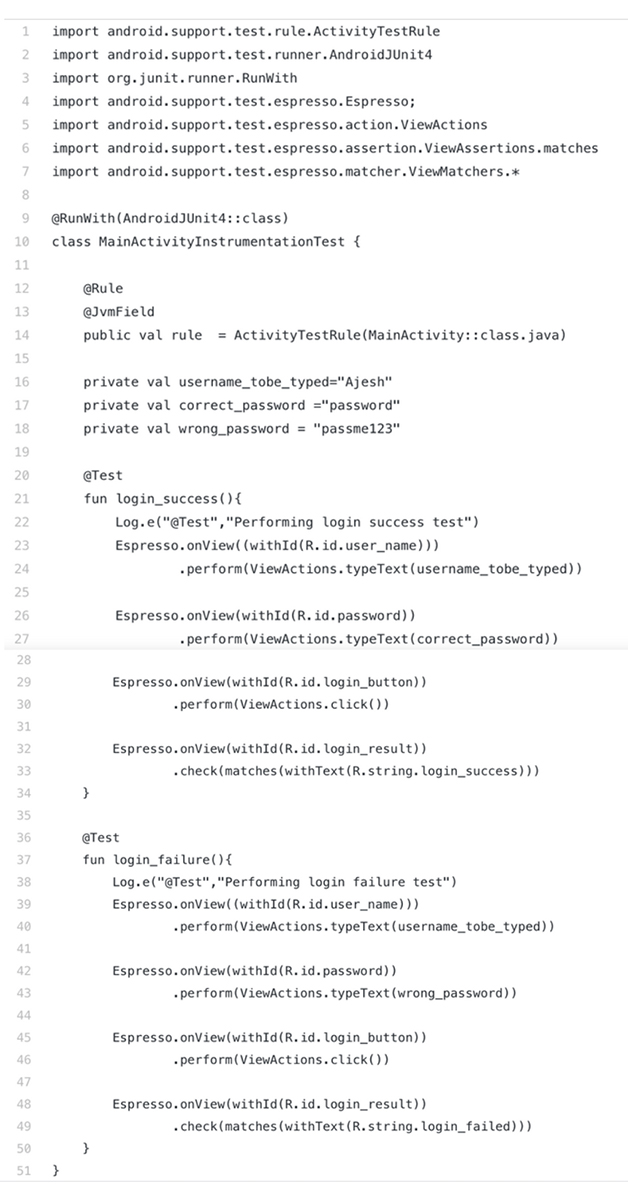